Local ISPs: Get Ready for Starlink!

Sometime around 66 million years ago, a San Francisco-sized asteroid affectionately named Chicxulub Impactor hurtled itself rather belligerently into the tropical waters just offshore of the Yucatan Peninsula. Not everyone was pleased.

Every life form within 300 miles perished instantly upon impact, which sounds really awful, unless you asked a life form within 3,000 miles how they felt: their deaths were by fire, burial, and asphyxiation. But even they had it lucky, according to many life forms elsewhere on Earth, who would not receive the news of their impending demise until weeks later. They would perish slowly in cruel and inconvenient ways over the following months and years, from causes including starvation, cannibalization, and just plain boredom.

Yet many life forms would go on about living life as if the whole Chicxulub affair never happened. Some would even go on to do quite well with their careers.

No matter where you are in the world, if you dig deep enough, you’ll cross a distinct line that scientists more or less agree vouches for the Chicxulub Impactor and its aftermath. The most striking difference between the ages? On a planet previously ruled by dinosaurs, there are no more dinosaurs.

Starlink’s coming. There will be losers and winners.

Starlink brings to today’s telecom what Chicxulub Impactor brought to life forms around the time it decided to drop in on Earth. Some unfortunate ISPs are going to die very sudden deaths. Others will die over the coming months and years. Yet thousands of today’s ISPs will carry on, and some among them will thrive.

This analogy is mediocre at best, or at least ironic since Starlink would not work for any life form anywhere on earth in the centuries that followed Chicxulub Impactor’s unannounced arrival. Too much dust for Dishy McFlatface. More on why that’s important to remember soon.

First, there are many reasons why some ISPs should be full-on terrified about what’s coming, while others should be excited for the opportunities that will emerge once the signal-blocking proverbial dust settles. We are entering a new age – the Age of Starlink – and while not every ISP will be pleased, others who embrace a weird, often-forgotten trick will flourish.

Starlink is live in beta for thousands of (mostly) ecstatic subscribers around the world. Their “Better Than Nothing” Beta appears by every category of measure to be an overwhelming success. Don’t take our word for it: see for yourself.

If we’re already seeing results like this at 5% deployment while primary features aren’t yet active, and we remember that Starlink is far from finished deploying its game-changing tech, it’s easy to imagine that Starlink will soon be able to provide strong speed and latency most places, most* of the time. While it was easy and perhaps cathartic for established providers to dismiss their seemingly pie-eyed ambitions, the time has come for local ISPs to confront a hard truth: Starlink is a killer product.

Starlink will be a fierce rival

Recently, SpaceX President Gwynne Shotwell clarified her company’s focus on rural America, stating that Starlink “will be able to serve every rural household in the United States,” or “roughly 60 million people.”

With its global footprint, a team of elite engineers, access to abundant capital, stunningly effective product, and global ambition, we predict that Starlink will grow its worldwide subscriber base to be as large as Comcast – America’s largest ISP – within three years.

At Ready, we are fortunate to get the chance to work daily with some of the fastest-growing ISPs in the U.S., as well as some of the investors pouring billions of dollars into broadband infrastructure. Our product helps local ISPs connect more people to better services. We follow Starlink’s progress closely and get to hear many perspectives about what effects Starlink might have on the ISP industry over the coming years.

We are very excited about Starlink, and applaud their team for bringing a world-changing invention to life. We think Starlink will change the world for the better. It will give the U.S. copper cartel a run for its money, forcing them to compete, just like Tesla spurred rival automakers to embrace electric.

Some of these events occur thousands of times per day at different times around the world. Others are tragic events that strike suddenly, at such times when we need reliable internet the most. That something could be ground objects like trees, buildings, or passing objects like airplanes, hang gliders, magicida swarms, or murmurations of starlings. Add to that list a large number of atmospheric events, ranging from stubborn clouds (midwestern summer supercells), fog (including Karl), light rain (fade), heavy rain (outage), the annual Saharan dust migration, snow including blizzards, hail, sleet, ice, seasonal crop dust, sand storms, haboobs, birds, atmospheric rivers, or any one of the 11,000 annual volcanic eruptions … you get the idea. 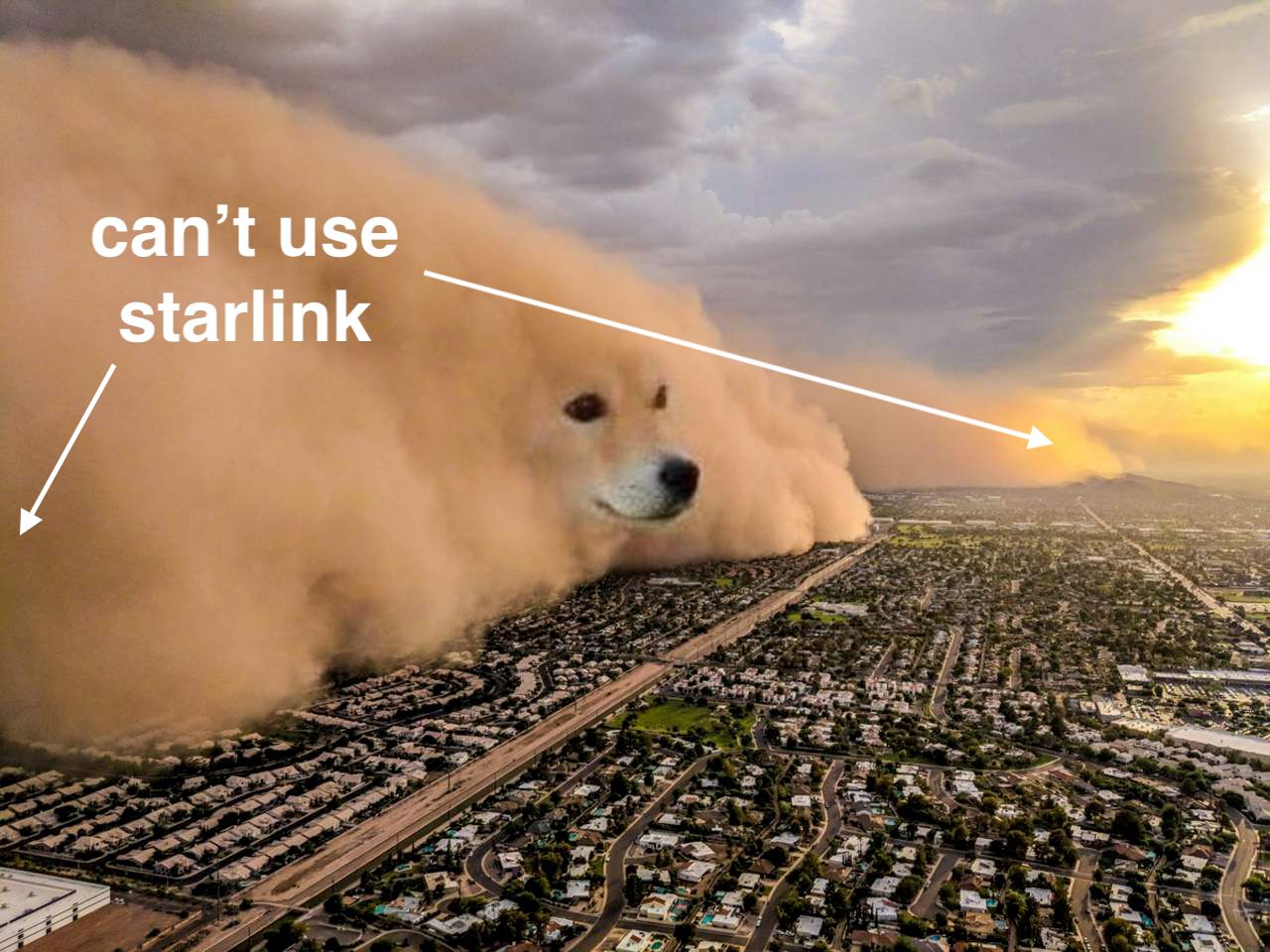 Doge Army may indeed overtake the world, but Starlink won't much wow inside haboobs

For any LEO user under the smoke of wildfire, severe interruption of signal is all but assured, for potentially prolonged periods. As such fires happen more frequently now, with greater intensity, we believe it’s important for local ISPs to focus on resilient networks. Add to this that Dishy tends to overheat during the summer in hot climates and the message is clear: policymakers, broadband infrastructure investors, and residents of forested areas: local ISPs are needed now more than ever.

Some ISPs will thrive.

Minor annoyances and tragic catastrophes aside, we also predict that Starlink will paradoxically increase demand for strong local ISPs. By way of Metcalfe’s law, through Starlink introducing potentially hundreds of millions more ultra-high bandwidth consumers to the internet, it could dramatically increase global demand for bandwidth, and thus for connectivity providers.

Among the survivors, a few ISPs will thrive. Local fiber providers, REC ISPs, strong WISPs, and community networks will flourish by embracing a simple principle:

Take great care of your subscribers.

Provided you have strong, resilient connectivity – fiber & high-performance wireless – and you do everything you can to take great care of your subscribers, you can thrive in the Starlink Age.

To survive and thrive as a local ISP in the Starlink Age, you must put your subscriber at the center of your business.

That’s precisely why we made Ready BOSS.

Our product helps growth-minded local ISPs deliver great subscriber experience. From finding and signing prospects in your territory, to seamless onboarding and billing, to cross-selling extras over the top of your network, and everything in between – your success ends and begins with subscriber experience.

Best of all, Ready is built to plug into your existing systems, so you don’t have to change out the systems you love. You just get more from them, and so does your subscriber.

ISPs: Don’t get left behind.

The Local ISP's Guide to the CARES Act

Local ISPs: we wrote this guide for you in the hopes it helps in some way as you navigate the new reality. Please keep fighting the good fight to get and keep your subscribers connected to strong internet during this unprecedented crisis.

What are you waiting for?
Get Ready to grow.